The members of the film collective CultJam Productions released the short film, Ivy League Exorcist: The Bobby Jindal Story, on its website (www.cultjampro.com) on July 17, 2012.

The film’s writer and producer Troy Davis explained the reasons for the online release: “Initially, I and other members of CultJam Productions wanted to do a more traditional release of the film, taking Ivy League Exorcist to the film festival circuit.   However, in recent months, with all the buzz about whether presumptive GOP nominee Mitt Romney would pick Jindal as his running mate, we decided to make the film accessible to everyone.”

The film is a dramatization of the bizarre events that took place in a Brown University classroom in 1990.  Jindal and members of a student Christian group were holding a prayer vigil for a fellow member who had been diagnosed with skin cancer when the afflicted woman suddenly collapsed on the floor, convulsed, and showed sudden and drastic personality changes that Jindal and the other students interpreted as demonic possession.  The group performed a makeshift exorcism on the woman.

Jindal wrote about the incident in a conservative Catholic journal The New Oxford Review in 1994; the title of the article was “Beating a Demon: Physical Dimensions of Spiritual Warfare.”  Davis got the idea of doing a short film about the incident after he read the New Oxford Review piece in the summer of 2011: “After I finished reading the article,” recounted Davis, “my first thought was, ‘Wow, this is totally surreal!’ My second thought was that of a filmmaker, ‘Wouldn’t it be cool to do a reenactment of the exorcism in the form of a mumblecore-style film?’”

Eventually Davis saw the subversive media potential of the film: “On the one hand,”  Davis quipped, “using a cinema vérité or mumblecore cinematography style, the film would have a documentary feel to it. I was convinced that some people viewing the film would be convinced that it was a documentary of the actual events—I’m reminded of a recent survey indicating that many people didn’t realize that Stephen Colbert’s TV show persona is satirical in nature.  We decided to introduce some over-the-top elements into the film, not just for shock value or cheap laughs, but to test the naïveté of the audience—were they in on the gag?”

Davis noted that the members of CultJam Productions, a film collective, were uniquely suited for the odd nature of the film: “In the nineties, I discovered postmodernism, media hacking, and cyberpunk culture; these aren’t just theories, they were and continue to be a way of life.  Mario Glaviano, the director, and Francesca Stonum, the co-DP and editor, are graduates of the film program at San Diego State University when they were protégés of postmodernist and cyberpunk theorist Larry McCaffery. Our approaches are complementary. It also helped that our assistant director, Mark Schwab, is a veteran of the mumblecore film movement and whose experiments in improvisation and the do-it-yourself ethic have been landing him accolades in underground film festivals.  The result was praxis, a merging of theory and practice.  The finished product is the essence of outsider art.”

CultJam Productions did a guerilla-style promotion of the film at Comic-Con in San Diego last week.  Davis noted, “We created a mini-comic book promoting the film that mimicked the style of the inflammatory fundamentalist Jack Chick comic book tracts (it can be seen here: http://ivyleagueexorcist.blogspot.com/2012/07/jack-chick-parody-tract-used-to-promote.html) .   We handed them out to the conventioneers and most thought we were crazy religionists but some of the more discerning people appreciated the irony and the fact that they were in on the joke. The film and the media campaign are intended to have a deconditioning effect, that is, it is intended to jolt people out of ordinary modes of thinking.  This film is very postmodern in that it employs pastiche, intertextuality, and blends highbrow and lowbrow elements.  I wouldn’t even call this film a satire because, except for a few gags, we pretty much played the events straight.  What is absurd is the actual event from 1990.”

Members of CultJam Productions are concerned that people will think the film is an attempt to influence politics.  “People who think this is a hit job on Jindal don’t get the point,” Davis said, “The college years are a time for people to do stupid things. If anything, I think that with Jindal, unlike Barack Obama who was doing coke in college, at least his heart was in the right place. He meant well. I think there are some deeper issues, nonpolitical ones, that the film addresses.  We will deal with them in the near future”
Posted by Les Zazous at 3:06 PM No comments:

This is an version of the Jack T. Chick tract parody created during the summer of 2012 to promote CultJam Productions' online short film Ivy League Exorcist: The Bobby Jindal Story (which can be viewed here). Ivy League Exorcist is an absurdist deadpan comedy that lampoons the actual exorcism that Louisiana governor and 2016 presidential candidate Bobby Jindal performed as a Brown University undergraduate. Richard von Busack of Metro Silicon Valley called the film "a sharp shocker . . . worthy of John Waters." The film has also been covered in the London Daily Telegraph, the Huffington Post, Boing Boing, Wonkette, and the Louisiana media. Here is a list of media outlets that covered us. Bobby Jindal's people were less impressed; Governor Jindal's spokesman called the film "insane" and "absurd."

This is the revised Summer 2012 version of the tract which was created to promote the film when Bobby Jindal was being strongly considered as a running mate by presumptive presidential candidate Mitt Romney. An updated version was created for the 2016 presidential race (there's also a version created for Chick tract fans).  Also, check out our online mini-comic lampooning Scientology. In addition, there's a 2016 Chick tract parody "Trump Is The Antichrist" that pokes fun at both Donald Trump and Marco Rubio.

More updates and links after the tract. Also check out CultJam Productions' blog. 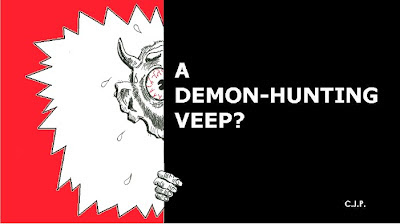 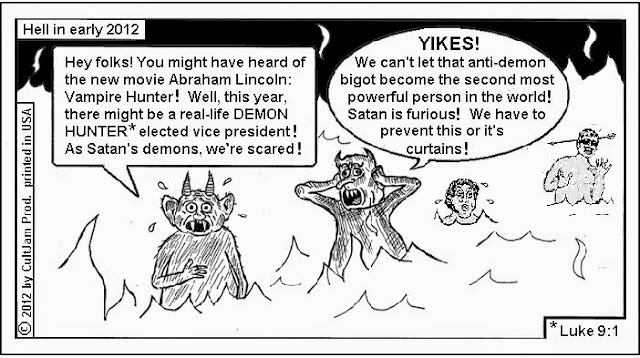 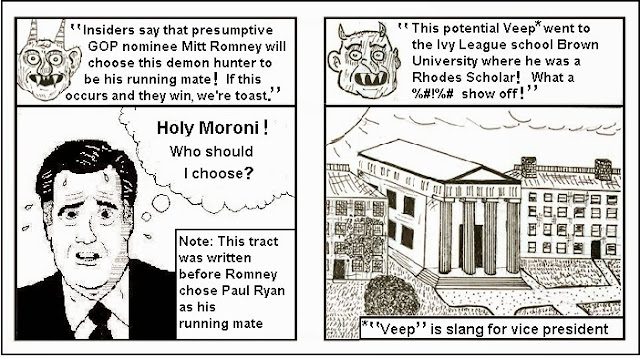 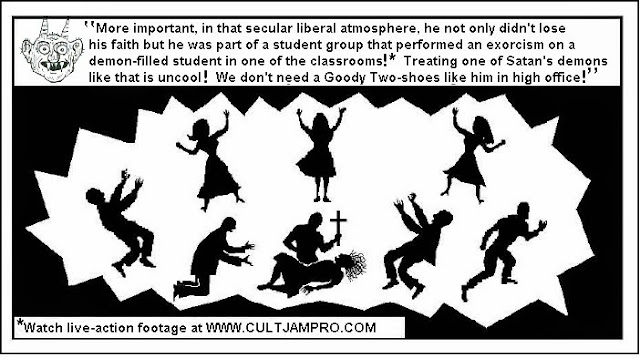 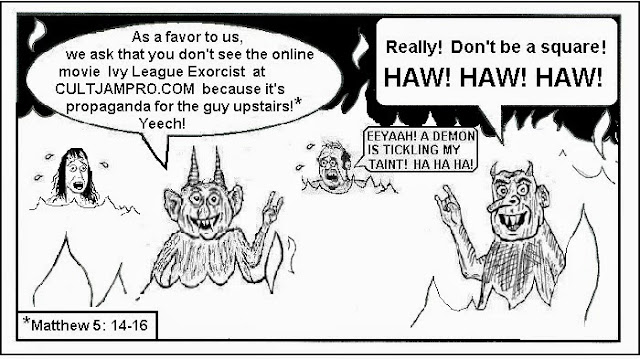 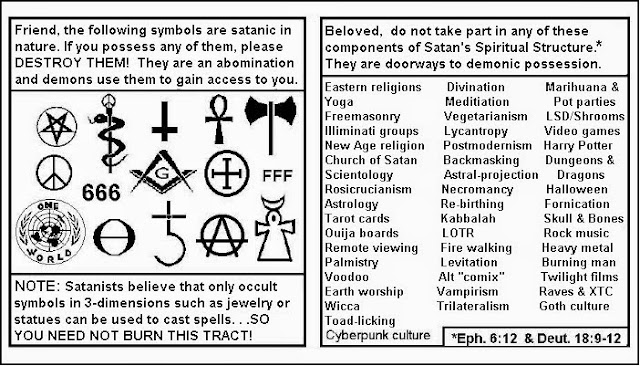 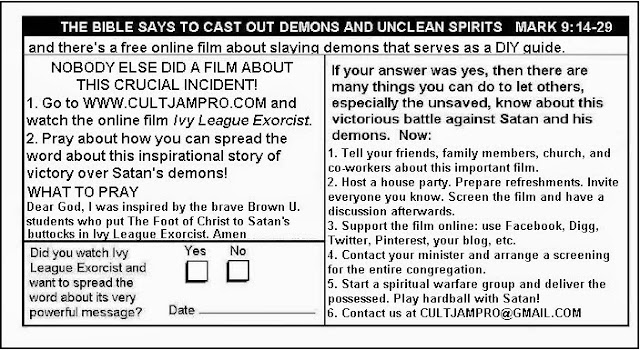 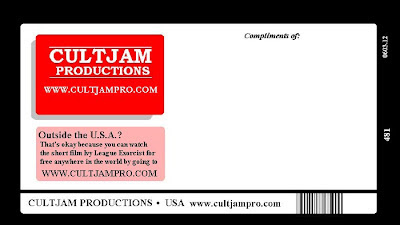 What was funny about the whole thing was that some real fundamentalists showed up and we passed out our comix tracts near them. The fundies thought we were on their team! Model Jessie Hail has a YouTube video where she flouts the fundies; I am behind the guys with signs passing out faux Chick tracts to unsuspecting Comic-Con attendees:


Some readers have noticed that the Chick parody tract “A Demon-Hunting Veep” has elements of various Chick tracts.  Chick tract enthusiasts know that the cover and premise of the tract are derived from “A Demon’s Nightmare” (one of the demons is based on the demon in “A Demon’s Nightmare?” and the other demon is based on the protagonist of the eponymous “Stinky”).  Page one has the title characters from “Gladys” and “That Crazy Guy!” burning in the fire and brimstone of Hell.  Page three has silhouettes based on images from “The Story Teller,” “Fire Starter?” “Party Girl,” “Fallen,” “The Great Escape,” and “Last Rites.”  Page four has Don (the band member from “Angels” who was into vampirism) and the pompous professor from “Big Daddy?” experiencing the eternal fires of damnation.  Page five has supposedly satanic symbols from various Chick tracts and comic books—notably “The Last Generation.”  Also on page five, the note that it isn’t necessary to burn the tract is a paraphrase of a line from “Spellbound.” The reference to “Satan’s Spiritual Structure” is taken from “Angel of Light.”

JUNE 2013 UPDATE: Welcome Boing Boing readers; Cory Doctorow mentioned us in his post!  Read the entire Chick tract parody below as well as our updated Chick tract parody.  The tract was used to promote our mumblecore-style deadpan comedy film Ivy League Exorcist: The Bobby Jindal Story (watch the film online here).  Read a theoretical discussion of memetics and semiotics regarding the way that the decontextualized portion of the tract became a meme. Check out our cool movie poster (it's a mashup of the movie posters for The Exorcist and Danger: Diabolik).  Also, if you like the film, could you give us a rating on our IMDb page because Jindal partisans slammed the film with the IMDb ratings.  Thanks.

AUGUST 2012 UPDATE: Welcome Boing Boing readers! Read the Chick comic tract parody below and watch the short film Ivy League Exorcist: The Bobby Jindal Story on YouTube. Also, check out our production company web site. The site has a cool Ivy League Exorcist movie poster. We at CultJam Productions have some other film projects in the pipeline, so if you would like e-mail notifications of future flm releases or if you want to give CultJam Productions your feedback, contact us at cultjampro@gmail.com Also, to go to the front page of the blog, click here.

Here is the parody of a Jack T. Chick tract that we gave out at Comic-Con last week. Click on a page to enlarge. AUGUST UPDATE: Mitt Romney picked Paul Ryan to be his running mate so the tract is a little dated now but still enjoyable.

UPDATE 3:  CultJam Productions created a new Chick tract parody called "Ivy League Exorcist."  This new tract takes the basic idea of the tract below and adds new gags and the kind of things that Chick tract fans love.
UPDATE 4: Click here an even newer version of the comic book with cameo appearances by Jesse Helms, Strom Thurmond, Osama bin Laden, and Sid Vicious.
Posted by Les Zazous at 9:44 AM 2 comments:

You can watch it on the CultJam Productions page .
Posted by Les Zazous at 12:50 PM No comments:

TROY DAVIS writes:
Here it is: 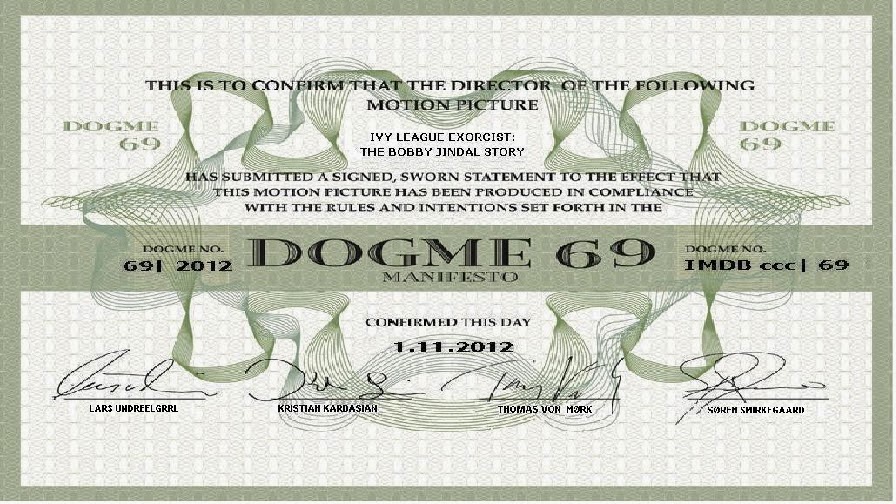 TROY DAVIS WROTE: This is the official movie poster. It is a mashup between the poster for the film The Exorcist and the poster for the 1968 film Danger:Diabolik. One of my friends said it was the best independent film poster he's seen. 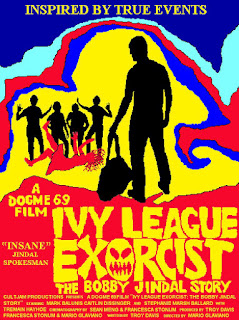 Check Out The Mini-Comic "Donald Trump Is The Antichrist".